Note: The term Error in forecasting is often interchangeable with Residual. Both refer to the difference between the forecasted and actual values. The Error or Residual Opinion Line can be added to a report by selecting the ‘Error’ option from the Opinions section.

Combining the advantages of Stepwise Forward Regression and Step Backward Regression, this method is the most powerful and the most popular of the three. This method works through an iterative process to determine the best explanatory variables. When it is no longer possible to find any new variable that contributes to the R-Squared value, or if no variable needs to be removed, the iterative process stops.

To use the Stepwise forecasting technique:

The graph you produce with ForecastX shows you a smoothed forecast of sales over the next few periods.

If you needed more detail, you could scroll down in the report to find the statistics. 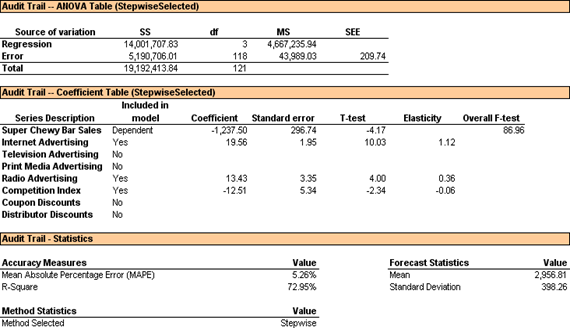 The summary contents show you the forecast has a Mean Absolute Percentage Error of 5.26%. Further down the report, you notice the Coefficient Table. Each series is listed in the left-hand column.

After most of the series, there is a Lag amount in parenthesis. This signifies there is a Lag dependency in the series. For this example, the Lag represents the days (independent series) it takes for the advertising method to affect the sales production (dependent series). For example, Print Media Advertising has Lag 1 following it. This means that the Print Media Advertising method does not have a direct effect on the sales production until after 1 day.

You can now confidently assert that Internet Advertising is having the most effect on your Super Chewy Bar sales.

Back to Forecasting Methods